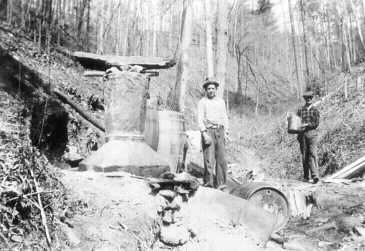 Here's an old photo from back in the 30's of Frog Gray and Speedy Rose.  Any long time resident of the Citico area would remember them well.  Frog is the little man standing by the still, and Speedy is the tall fellow holding up the whiskey can.  Frog and Speedy "batched" together for a good part of their lives.  To get by, they made whiskey and farmed a little on the side, working a good piece of river bottomland that had been in Frog's family for generations.

About an easy stone's throw from the old farmhouse that Frog and Speedy lived in, on the bank of a small branch, lay the lonesome grave of Frog's ancestor, Captain Joe Gray of the 3rd Tennessee Infantry, Union Army.  Captain Gray was buried just a few feet from where the Kirkland Raiders bushwhacked him during the Civil War, on January 15, 1865.  Before becoming the captain of Company H of the 3rd TN, Joe Gray held the rank of 2nd Lieutenant in the 2nd Tennessee Calvary, U.S. Now the old home place lies beneath the waters of Tellico Lake, but the fireplace brick and assorted rubble from it can still be seen when the water goes down in the winter.  Captain Gray's remains were exhumed prior to the impoundment of the lake.  He now rests beside his wife in Bakers Creek Cemetery in Blount County.

Frog and Speedy's nicknames fit them well, for Frog really did have some features that reminded one of a frog ... and Speedy, who was slow talking and kind of knock-kneed, moved about at a dragging, terrapin-like pace when he walked.  Speedy had been ruptured f or years when I knew him, and always wore an old truss that looked kind of like a big girdle.  I can still see him plodding along with his faded overalls hanging on him, unbuttoned down the sides, no shirt on, that old dingy looking truss showing.  When I was a little kid I thought it really was a girdle, just like Mom's... and figured that when I got growed up, I would wear one too.

Frog and Speedy would take a drink without any inordinately excessive amount of arm-twisting, and moonshine whiskey was their beverage of choice.  But, they were both kind-hearted and well liked by all, and they never hurt anyone.  They were just two good ol' country boys, always friendly, and always hospitable to company.

Not long before he passed away, I came across this picture and showed it to my dad. "You remember these two fellers?" I asked him. He took it from me and held it way out, almost at arm's length... as he had became pretty far-sighted over the years, “Why yeah….” He grinned.  "That's Frog and Speedy.” I could tell that he was kind of surprised that the picture he held in his hand even existed. "Yeah.  I've been to that big ol' still a manya-time.” he said.

Dad told me his brother left home when he was 14 years old to work "a-makin' likker" with Frog and Speedy at that very same still.  He said it operated for quite a few years, and probably made more whiskey that any "outfit" he ever knew of around Citico.  He told me who owned it... the "furnisher" he called him.  I came to find out that that was the man who supplied everything, such as the sugar, malt, meal, and even the jars.  He told me the still held four barrels of mash, and when it got warmed up and cooking real good, "it'd run a stream o' whiskey as big aroun' as yer thum"'. I have no doubt that it did, judging from the size of that rock laying on top of the still, to keep the cap from blowing off.