Mud Gap on The
Cherohala Skyway
By Bill Baker 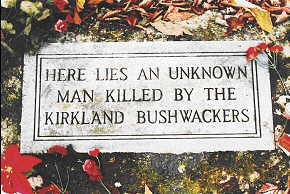 This is a replica of the original monument that was located at Mud Gap. The original was stolen over 20 years ago. Charles Hall and Friends hauled the stone and concrete and mix by jeep over Whigg Meadows, to replace the monument. They left the spelling as the original with Bushwhacker misspelled. - Photo by Bill Baker

One point of interest to anyone traveling On the Cherohala Skyway is Mud Gap.  Situated at 4480' in elevation on the spine of the Unakas, the old road from Tellico Plains to Robbinsville, North Carolina used to pass through this gap. The old route was undoubtedly the same ancient path, which linked the Cherokee town of Great Telliquo with that of Cheowa, which was located at present-day Robbinsville.

The Cherohala Skyway was built directly on top of the old road in several places, and it can still be seen intersecting with the new highway in many different spots. The old road was rocky and narrow; actually, never more than a rough Jeep trail at best. But today, family cars can travel the same ridges once tread by the moccasined feet of Cherokee warriors ...and pass safely through high mountain gaps once made dangerous by desperate outliers and bushwhackers during the Civil War.

When traveling towards North Carolina from Tellico Plains, after leaving Stratton Meadows, be on the lookout for the sign and elevation marker signifying Mud Gap on the left side of the road. Just a stone's throw before reaching the sign, the old road can be seen on the right, intersecting into the Skyway at an angle. There is a pipe gate across the road, put up by the Forest Service. Park there and walk up the old road. Just a short distance from the bar, in the low bank on the left side of the road, lies the lonely grave of a man killed by the Kirkland Raiders.

Who was this man? Was he a soldier heading home from the war ...with a wife and children anxiously awaiting his return? Was he alone traveler passing across the mountains for some reason that only he knew? Or ever will know? Did he have some possession that caught the eye of an outlier… a gaunt horse, a rifle, maybe a piece of bacon?

Most likely, the world will never know the identity of the man buried by the side of the old road at Mud Gap. He was just one of thousands, soldier and civilian alike, who left home during the Civil War and never returned… whose family and loved ones never knew their fate.