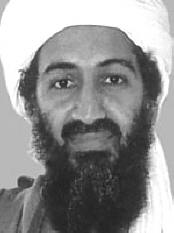 Got too big for his breeches,
which were tattered
in the fashion of men with far fewer resources.
The hungry, hollow stare of Osama’s face
when he fires an AK reveals
an uneasy surprise.
Recoils unexpectedly disrupt
his thin frame.
There is always a question in his look.


What does this man think of thousands?
What does any man really think?
Television packages terror in such a way
that nothing seems real or dangerous.
Thousands of tons of material
are contained by the edges of advertising.


Could media survive without decrying
actions necessary for its very survival?
Many things crumble when
the thumb’s down.
Melodrama is pitched against the empathy of pity.
Everybody feels helpless, then useful,
then powerful and strongly proud.


Osama’s beard has grown through
the dark hole of world government and humanity.
Fundamentalists are at the center of suspicion
on all sides of the political debate.

Beware of your neighbor’s eccentric behavior
While being careful not to covet his wife.