We drove up Rafter Rd. for the first time in 1976. We were following instructions from our friend, Robert, who owns the property next to ours and was trying to hook us in as neighbors. He said he didn't want McDonald's to buy the land. I believe the chances of a McDonald's locating in Rafter, Tennessee are rather slim. (However, the sides of the Road look as if McDonald's and Hardee's and Burger Biggie are all doing a subtle invasion, sending up an advance force of plastic clamshells and french fry containers licked clean by the roadside dogs.  The McTrash is always there. It just gets covered by the leaves in the Fall.)

Our first trip up Rafter was magical. We were looking for land to build a place in the woods where you couldn't see your nearest neighbors and Rafter had all the ear marks of the kind of Road that would lead us home. It was barely graveled. We would tell people later that it was a "semi-dirt" road. Most of the gravel had worked it's way to the sides and the potholes were frequent and numerous. We joked that the County Road-guys must stand and toss a coin to see which one of the four or five holes should be filled in before they moved on to the next bunch. The best thing of all was that the Road was snaky. (I later learned from observing road kill that it was true in both senses.)

The road curved and climbed and twisted and turned and there were no guard rails!  It was a real mountain road with three or four hundred feet to drop off along the way if your car should slip over the side. We were thrilled. Surely this road would not encourage people to move up here. We laughed when we saw "Mud hole TN. speed limit 10 mi. per hr." scrawled on an old wooden shed. (We had yet to experience the area after a few days of rain.)

When we passed the Hardshell Cemetery and House of Prayer sign and started down into the few road bends, which are almost switchbacks, we made the decision that we could handle driving Rafter Rd. We were Adventurous Spirits.

We bought the land we call "Once Upon a Mountain" back in '76 and came down from Ohio every year to camp. Then one day in 1983, we packed everything we owned into a U-Haul truck and moved to our mountain.

We started up the road in that over-loaded cumbersome vehicle with some anxiety about how well we had packed our more fragile household goods.  We were amazed to find that Rafter Road had been graded, groomed and freshly graveled. We were convinced that the Lord had caused it to be done just for us.

Over the years we learned the "ups and downs" of driving a true mountain road. If you saw another car coming toward you, you both slowed down and crept past each other. Sometimes you stopped side by side for a visit with a neighbor. This was allowed as long as you moved on when someone pulled up behind you, unless they happened to be neighbors, too and then they might get out and join the conversation.

A lot of this went on, as everyone on Rafter were neighbors. When you passed someone, it was considered good manners to acknowledge them with a strange little wave of your index finger lifting off the top of the steering wheel. Everyone did it.

If you were of the male species, it was important to carry your chain saw in your truck to remove the limbs and sometimes whole trees, which had fallen into the road during storms. A friend told me the main thing to remember was, "there is a fully loaded log truck coming around every curve."  This might even occur on a Sunday afternoon.

The majority of hours I spent driving  Rafter Road, I never saw another car but things started changing. Every year there were more driveways cutting off to the sides. One year we found the Road being covered with ASPHALT. Rafter Road was PAVED. People started driving faster when the danger of potholes was gone. Then an awareness of the School Bus Safely Factor came about and guard rails were installed in a few of the worst places. With the feeling of confidence that this allowed, people started driving thirty-five miles an hour instead of fifteen. It began to seem as if there was always a truck or car in front of you and one or two behind.

Middle of the road chats with neighbors became rare. Motorcycles started happening. Tourists discovered that Rafter Road is the back route to Indian Boundary Lake and now there are people driving Rafter who don't wave. We told each other that the Road itself would never change.....how could they change the course of a road that started out being the easiest way for a mule to walk down a mountain? How could they do anything to change twenty-foot walls of granite on one side with a sheer drop of hundreds of feet on the other?

They are doing it. They are widening Rafter Road. Huge chunks of rock have been blasted and moved from one side to the other. The sharp curves will be gentle curves and there will be room to pass other cars without slowing down. When the job is finished, we who drive it daily will probably be safer, but maybe not. The better the road, the more people will be tempted to build homes along it. There will be more traffic and it will be faster. A fifteen mile per hour cruise up the mountain, enjoying the colors in October or the dogwoods in May, will be impossible with three cars behind you trying to drive at forty-five.

I'm not against progress; it is inevitable. However, I miss the way it used to be, pot holes and all. But one thing hasn't changed. If you are driving Rafter Road, there is always a fully loaded log truck coming around every curve. "

Once Upon a Mountain
Rafter Road - East Tennessee 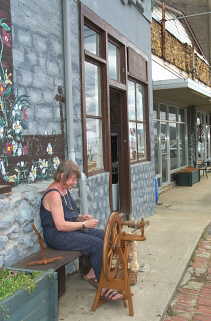