River of Dreams
By Bill Baker 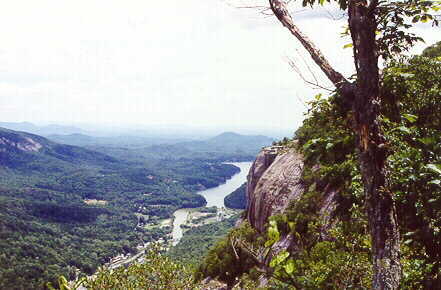 I had wandered several miles that day. It was autumn; late in the season ... one of those cool and beautifully bright days when all haze and humidity had dissipated. With an unhurried stride I tramped along the edge of a woods and across some old abandoned pasture fields, my progress unfettered by fence or briar, every other step punctuated by the cadence of my twisted walking stick poking the ground. The sun stabbed dazzling shards of radiance at me bayonets of light, which thrust through the leafless branches of the trees and the lashes of my squenched eyes as I walked.

Wafting out of the west, a light breeze urged me along. In its tumbling wake I trod, observing each minute change of its course in the bowing fronds of golden broom sage. The air was delightfully cool and fresh, and I breathed it deeply, inhaling the healthy fragrance of cedar and the musty earthiness of dry leaves and oak bark. Lifting my eyes, I saw the Appalachian Mountains standing tall and stark against the sky slate blue against an ethereal turquoise. Hangover Mountain rose majestic above all, cresting towards the east ... a podium built by the Creator for greeting the new day.

Lapping at the bottom of the rolling hillside upon which I stood were the placid waters of a lake man-made, an unnatural aberration upon an ancient landscape. Stopping for a while, I stood and gazed out over its surface, pondering, thinking back, remembering the old river valley ... now entombed in a watery grave. A veil of melancholy fell over me for, in my youth, I had known it well.

I had known each and every turn of its winding country roads, of the main paved one that followed the river, and every dirt and gravel lane that connected to it. I remembered a clattering old school bus bouncing in and out of chug holes, hauling a noisy load of rowdy "young'uns" the mail man's car, eternally caked with mud a teenage boy, ripping along the gravel roads in a '53 Mercury, exhilarated by his first taste of manly freedom, and the kiss of a freckled faced girl. I remembered dusty coupes and sedans floating across the river on a ferryboat pushed by a smoking little outboard motor. And, the steel bridge, rusty and aging, its creaking cross bucks groaning in protest each time a car crossed over it, while on the muddy creek bank below, a tousle-headed boy with a cane pole sat watching a float. I remembered great rumbling log trucks mashed to the earth underneath oversize loads, driven by wiry men with rosin stiffened overalls and week-old beards. And, I recalled an old farmer doddling along the river road in a chugging pickup; never driving any faster than his fat dog could trot the truck's shaky cattle racks swaying from
side to side.

I had known every humble white frame house along the way, each with a porch and an assortment of ladder backed chairs, some rocking, some straight-legged, and always, a swing or a sliding metal lounge. There on those porches, where the womenfolk pared apples and broke beans in the summer while the children of the family, their young bodies so full of energy that they never seemed to tire, swung on skreaking screen doors and let flies in the house, running in and out, letting the door slap shut, until one of the women would yell, "Get in or get out!" I remembered the big shade trees in front of the houses; maple, oak, and box elm, where the men sat after Sunday dinner, whittling and chewing, talking about crops, coon dogs, politics, and the old days.

I remembered the tin roofed barns, their plank siding gray and weathered ... the site of frantic frolicking corncob fights between cousins and kin. In my mind's eye I could still see the fields, bordered by locust fence posts strung together with rusty barbwire. And, I recalled the names of the families that lived along the river. They lay permanently etched upon my mind, still scrawled there like a name on a mailbox in front of a lonely house where no one lives anymore. Looking back through the years, familiar faces I saw once again... in particular, the faces of the old people...

The old men, with sweat stained Fedoras and patched overalls of pale blue, fading to white their gaunt faces crinkled from long days in the sun, long days of hoeing, plowing, and working the river bottom hay fields vigorously gumming a cud of chewing tobacco leathery brown hands, knotty and callused with bodies stiff and bent, but spirits yet young, quick to laugh an easy laugh or tell a big yarn fathers that taught their sons what their fathers had taught them, and that, whether it be a man or a mule, if it won't work, it ain't worth much...

The old women, with bosoms low, gingham aprons and thick beige hose a dip of snuff under the bottom lip a pair of cat-eye glasses hands gnarled from a long hard lifetime of work, and pruney, from washing clothes by hand ... but soft and gentle against a crying grandchild's cheek ... their hearts, great wells of human compassion, sustaining three and four generations of family mothers who taught their daughters what their mothers had taught them heartbroken mothers, a telegram and a purple heart put away years ago in an old family Bible, the lives of their beloved sons, freedom's price, whose last breaths rose heavenward above horrid fields of death, faraway from this peaceful valley...

My thoughts rambled back to the ambitious youth who had left this old valley decades ago, a teen-age boy who had set out on his own and who had relentlessly labored the greater part of his life away in a big city, giving up all that he had known for the wealth and material possessions which he thought would bring fulfillment. Now, with years grown short 'and spirit decimated, too late the realization came, true wealth had been discarded in favor of a slavish, rushing life of debt and worry. For, in truth, no amount of money can purchase anything more gratifying than the simple pleasures of a humble life well lived among loving family and faithful friends, in a God blessed land. But now, now that I had finally came home... there was nothing to come home to.

As I stood there, leaning on my walking stick, pondering upon things lost, I heard a bird call out from above. Raising my head, I pushed back my hat and saw a beautiful red-tailed hawk. With wings spread wide, it seemed to just be hanging there, effortlessly, floating upon a current about a hundred feet in the air above where I stood. Oddly, the hawk was looking directly at me, staring down from above with its head cocked... showing no sign of fear. It seemed incredible at first that a wild creature such as a hawk would come so close and do such a thing. As I stared back, I began to feel an extraordinary current between the bird and myself, a spiritual linking with a being whose life force I instinctively recognized as being equal to mine. It was as if the hawk knew what I had been thinking, and had appeared to share something with me. The experience was surreal... unlike anything that I had ever felt before. once again the hawk cried out ... an anguishing note that seemed to carry within it, some emotion ... an emotion of loss.

Suddenly, out of the blue, I remembered being at my grandmother's house once when I was a very small child. While I was there, an elderly Cherokee herb doctor called Walking Stick stopped by to visit her and peddle some of his remedies. Sitting at the kitchen table with his herbs all spread out before him, I remembered, he had talked to my grandmother for a good while concerning the curative properties of each herb and bark, and about how the Creator had originally provided Man with all that he needed within nature. But Man wasn't satisfied he had said, and for the want of more, Man had sought to change the world to suit his own selfish desires, and that in doing so, in the end he would only bring about his own misery, unhappiness, and destruction.

I had hardly given this small episode of my life a second thought in all these years, but now it rushed back to me with an astounding clarity. I could still see him plainly, old Walking Stick, his long gray hair falling below his shoulders. With a child's innocent powers of observation I saw him wistfully looking out my grandmother's kitchen window at the mountains and river valley. His eyes however, seemed to be focusing upon something that only he could see. After a moment, he spoke again. He said that long ago, his people, the Cherokee, had once called this valley their home, and that when they were forced to leave; all they left behind was the bones of their ancestors... and the red-tailed hawk to cry over them.

The hawk called out again, an expression of anguish, a crying out from on high for that which is lost and can never be had again. Now, all these many, many years later... I truly understood Walking Stick's words. An overwhelming surge of enlightenment and sorrow filled me, and I raised a hand towards the hawk. With an easy flap of its wings the majestic bird then banked on the wind and gracefully sailed away up the lost river valley, heading towards the east and the far blue mountains. Left behind on the sage covered hillside, I stood and watched, watching until the hawk became a tiny speck against the eastern sky, and finally disappeared.

All the time I stood watching, I also stood wishing, wishing with all of my heart ... that I could be a hawk too.