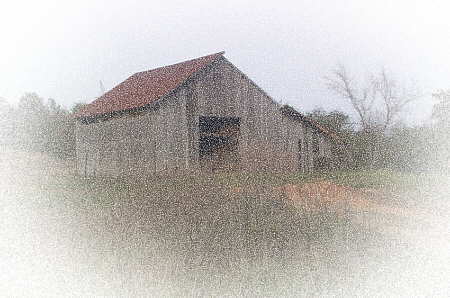 Somewhere in the autumn of my life I returned to the home place of my youth. I slowly strolled around the old house and felt a compelling need to wander toward the old vacant barn. The wooden fence nearly crumbled from rot as it grudgingly creaked open. As I entered the hallway of the old weather beaten structure, loose pieces of tin made clapping sounds as the late autumn wind blew through, over and around the empty shell. Even the rodents seemed to have abandoned the place. Vivid memories flashed before my mind.

It was in this hallway that I came every morning and evening to hand milk the cows. On cold winter mornings, my hands stiff and numb from the cold, I would watch the milk splash on the sides of the cold steel bucket and freeze in rings on the sides. In the summers I could not count the times my face was slapped with a cow's muddy tail, or the times a muddy hoof was, deliberately so it seemed, planted firmly in the bottom of my pail of warm milk.

How many wagon loads of manure did my father and I fork out of this old barn in the spring and haul to our tobacco ground and spread to fertilize a new crop every year? Soaking with sweat, and wearing calluses on our hands, my father so frequently reminded me that whatever I did, to do it well. "There is pride in hard work," he so often told me. "Even if you are only loading and spreading manure, give it your best," he so often told me, with the wisdom of years of experience. "Don't ever halfway do anything. If something is worth doing, it’s worth doing right."

It was in this barn that my father taught me never to fear. We had an old Jersey bull. He was huge, well horned, and MEAN! My father made a single yoke from a hickory tree and tied it around the bull's neck. A large chain hung to the ground from a ring in the bull’s nose, which was designed to keep the bull from crossing the electric fences that surrounded the pasture fields. The bull was usually kept up in an especially strong stall in the barn. But we had to let him out occasionally, to breed with the cows.

Once he had broken out of our fences and my father and I ran him for hours before we managed to get him into the wooden-. fenced barn lot. In order to get him back in the stall, we ran him into the north end of the barn and dad told me to run around to the other end and herd the bull into the stall. took a long handled pitchfork and stationed myself at the other end of the barn. As my father prodded the bull in my direction, I was to drive him into the stable. The bull lowered his horns in my direction, snorted, pawed the ground and lunged directly toward me. An instant vision of my limp body held high and stuck on those horns like a trophy compelled me to fling down my pitchfork and run like hell. The bull's horns narrowly missed me by inches as the fearsome beast roared out of the hallway at the end of the barn and began another two hour rampage around the neighborhood, ripping through fences at will. My father lowered his head and shook it from side to side slowly. "Never thought I'd raise a coward," he said, in a deep guttural and frustrated voice aimed in my direction. That was the moment in my life that I resolved to die before I would ever show fear again in the rest of my life. The rest of that story is anticlimactically! After several hours of hard running and harder cursing, we were in the same situation in the same hallway of the barn again. Again the bull lunged at me and this time I stood my ground. I slammed the pitchfork with all my power and hit the bull squarely on the nose where the huge metal ring was attached. Even before the blood could spatter from his nose to my face, he braced himself with his front legs and abruptly turned and lunged into the safety of the stall, slamming against the wall with the force of a freight train. His bellow could have been heard for miles. I closed the heavy iron latch on the door, and that was that. My father silently stared at me and I saw a slight smile break on his face as he put his arm around my shoulder, and we walked out of the barn together. Now it seems almost impossible, standing in this old vacant barn to believe that such drama ever took place here.

And once when my father was hewing an axe handle from a piece of hickory here in this old hallway, he decided to make me a "flip." He carefully whittled a stock from a 'y' shaped limb. Then he cut two strips of rubber from an old tire inner tube. Then he tied an old leather tongue from an old shoe to one end of the strips and tied the other ends to the wooden stock. Then I had my first 'flip'. It was only a few days later that I was leaning out of one of the loft windows and saw a small wren hopping around on the ground below. I took careful aim with my new toy and let fly a rock toward the bird. It caught the poor thing squarely on the back. watched for some time as the pitiful creature fluttered in pain and agony in the dust. As the bird died, its pain became my pain. I rushed to the house and hid the flip under the bed. An overwhelming sense of guilt remained with me for weeks and weeks. I could never bring myself to tell my father I had killed an innocent creature with my flip.

It was in this barn that my father let me shoot my first hog. We had kept the hog up in a stable and fed him well with corn to fatten him. On a cold Thanksgiving Day we made all the preparations for 'hog killing'. Huge pots of water were boiling on an open fire. My father took me into this old barn and handed me the rifle. "Aim right between the eyes," he told me. "You got to hit him right in the brain." I fired, and the hog went down. "Now, take this sharp butcher knife and stick him deep under his breast bone." As I stuck my first hog the warm thick blood came oozing from the wound. "You got to stick him to get the blood out, or the meat won't be any good." Then we pulled the carcass out of the stable and plunged it into a barrel of boiling water, sloshed it around, and began scrapping the hair from the hide. We killed a lot of hogs in this old barn!

My God, this old barn was workplace, playground, and school! But even more, it was a temple of remembrance, of worship, for I worshipped my father and spent so many timeless hours here. It was in this barn that my father gave me my only real threshing with a hickory switch which left welts on my back and legs for days. And it was in this barn that he first told me that he had cancer and was going to die soon. And then he returned to the chore of milking the cows. Some day, I'm going to build a huge stone temple around this old barn. People will look at me and ask, "Why is that crazy old man wasting his saving's of a life time building a stone temple around that rotting old vacant barn?" I'll just smile with tears in my eyes. They, of course, will never understand. 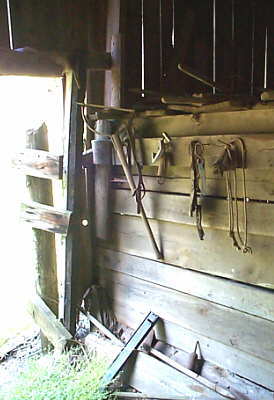