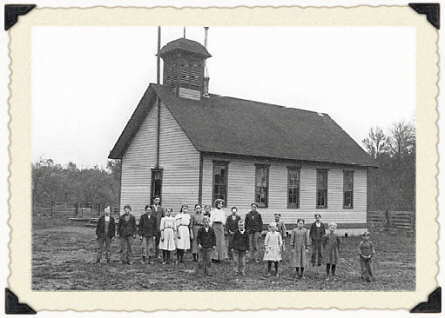 The Old Schoolhouse
By Tom Pare'

There is a country road that I remember just dimly. I don’t know where the road started or where it finished, but I do remember that on its West Side a school stood lonely at the top of a slight hill in a thistle and rye grass field. Not made of brick and mortar, it was a gray and weathered wooden building, probably a hundred years old. It had a broken double door in front and four windows on each of its sides. And a tower-like steeple with broken shutters, pointed upward in the last vestige of a saddened majesty. In its belfry there had been a bell, long ago stolen, which once tolled a welcome to slickhaired boys with cowlicks, and prim and proper girls with flipping curls and handkerchiefs in their sleeves. And the boys carried books, if they remembered them, tied in belt-like straps, while the young ladies, as they were called by the teacher, carried theirs in the crooks of their arms. The boys walked slowly, whispering together, not minding if they were almost late but not wanting to be past the bell, while the girls skipped a little or walked in giggly groups, often sneaking peeks behind to snicker at the boys.

At the sound of the tolling bell, the young ladies were already sitting at
the maple desks, while the masters trudged slowly up the aisles toward their seats, and the hair-bunned, bespectacled schoolmistress impatiently tapped her oaken desk with a pointer stick. And at the end of the school day, they left the room in reverse order. The young masters pushed and shoved and punched arms while racing out the double doors with books, if they remembered them, flailing in the air as they galloped down the rutted road heading for home. In the classroom, the young ladies gathered their books and said the necessary cheery good-byes to the smiling teacher and to each other, and then they left in their chosen groups, shaking their heads after the ill-mannered herd of gentlemen far out in front of them.

Now they are all gone to wherever students eventually go; the girls to wives and motherhood and the boys to the farms and fatherhood. The schoolhouse still stands as if someone may come back, not unlike the old lady who waits out the rest of her life looking out the window, watching for her husband who has long since departed. In both cases, they will stay alone and deteriorate. When the cold winds of November come storming from the northwest and bend the ryegrass and toss the thistle seeds and slam the few remaining shutters of the bell tower, there must certainly be some spirits who remember warmer days, like the widow’s rekindled memory as she smiles faintly in her reverie. I have watched the schoolhouse from a vantage point at the two stone steps that lead up the path to the silent doorways. Time has moved the top step so that it pitches forward on its side and now touches the top of the second. Black-Eyed Susan's and purple-blue thistles grow in the ditch with wild white daisies alongside the common grasses of the field.

In my imagination, I have listened to the memories of the old school while I sat on the ditch-edge. I have heard the children on the road and in the class and watched them as they yelled, "you’re it" while playing tag at recess, under the watchful eye of the mistress. And just like the old schoolhouse, I watched them grow up and send their children to the same place and play the same games and be watched by the same teacher. I smelled the new smoke as the mistress arrived early in the morning to fire up the wood-stove with the kindling from the box in the corner of the room. And by the time the young ladies were seated and the galoots were running up the aisles, all were sufficiently warmed, and the schoolhouse sent its thankful message skyward through the stone chimney.

As winter neared and the grass browned, the sun seemed to set much farther away, and the clouds came in long narrow strips one after the other, with patches of red and yellow occasionally showing between them. The sun died rather swiftly in the season of pre-winter, and as the classroom emptied in late afternoon, the fire died also, and the schoolhouse was left alone, while the winds came up the hills from behind and whipped under and around the timbered foundation. The bell-tower shutters shivered in the night wind, and at times in late November, a few flakes of snow tapped on the windows, only to shrivel up and slide down the glass into the chipped putty.

But morning came, and with it came the children and the mistress and the sounds of chalk on the slate and the noises of the grates in the stove as ashes were shoveled out and new firewood began to crackle. And the old schoolhouse warmed up to another new day. Boys took turns carrying out the ashes, and they spread them on the pathway and on the little porch leading into the classroom. Others brought in firewood from the pile under the windows on the south side of the building. And they fought to see who could carry the most, and they showed off for the girls, who pretended that they didn’t care and said how stupid the boys were. Soon the hard snow came, and it was the time for lost mittens and knit caps and scarves tripled on the neck if you were a girl and stuffed in a pocket if you were a boy. The mistress made sure that the floor was kept clean of snow and the stove properly stoked, so that the schoolhouse would be warm.

In time, the worst thing that could happen to a schoolhouse did happen. The town died. That is, the kids grew up and moved away, and after all the many decades, there were no students for the old one-room schoolhouse, and it was left by itself all day and all night. The old stove rusted, and its pipes fell to the cold unpolished floor. The last woodpile was now rotted and a home for chipmunks and the occasional snake, and the pathway was grown up in weeds, hiding the stone steps. When the cold winds came, and winter killed the grass and the meadows, and with no one to laugh and holler and fire up the wood stove to warm it, the schoolhouse also died. At times the winds blew the bell, and it tolled as if it was crying for help. But no one came to help. Instead, they came and took its bell away. Just one shutter was left on the bell tower, and at times it clattered in the wind, because it was now held by only one hinge.

One spring day, a lilac bush sparkled to life next to the porch, and right in the middle of the pathway, a host of Johnny-jump-ups popped through the ground, and the smell of new life floated across the meadow, and frogs hollered from the ditch. A sugar maple in the front yard, that had been planted by the boys and girls over fifty years ago, suddenly sprouted little green shoots, and it seemed like the spring times of schooldays past. Soft breezes and robins and promises filled the air.

But something was missing. It was the sounds of the children; the laughing, clamoring, giggling sounds of the boys and girls running to beat the bell. In place of the happy noises was silence. Was no one coming? Suddenly there was a new noise; one that hadn’t been heard around the school before. From far up the road came a bus, a big yellow bus! And as it approached, loud singing and laughing and yelling could be heard. As it got nearer, the voices got louder and louder, as if gleeful over their return to the school. The spirits in the old schoolhouse must have shouted to each other, "They’re back. They’re coming back."

But the bus didn’t even slow down as it neared the schoolhouse. It roared past on its way to a new modern school a few miles away. Moments after it disappeared down the road and the joyful sounds of boys and girls had silenced; a loud noise came from the roof of the old schoolhouse. Although it was a perfectly windless day, an old wooden shutter fell from the bell tower onto the shingled roof, and it came to rest on the porch, in front of the old broken doors.

If you should go by this old schoolhouse, stop and listen very carefully.
Sometimes on warm spring days, you might hear a sigh, and if the breeze is just right, there may be muffled sounds of laughter, or a pointer stick tapping on an old maple desk…..I have heard them.